This workshop is an invaluable and insightful look into your rights as a non-union actor. Mr Walker screens his introductory documentary film GettingPaid.us, before finishing with a LIVE Q&A session, discussing his experiences in the Entertainment Industry in Los Angeles, California.

Writer, Producer, Presenter PhilE scheduled more than 900 gigs or appearances during his first 5 LA years, including as a Principal Dancer in Justin Timberlake’s “Can’t Stop the Feeling!” official music video. He is currently acting as an On Camera Principal for 5-time Academy Award nominee Darren Aronofsky, who directed an anti-vape promo video for the United States Food & Drug Administration, called “Only One Leaves.” Phil was a Co-Star on the 1st day of shooting opposite 6-time OSCAR nominee, actress Amy Adams, in the Golden Globe Award winning HBO miniseries “Sharp Objects.” 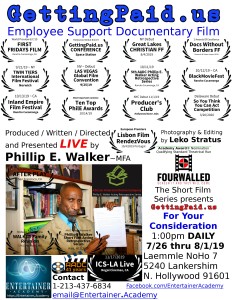